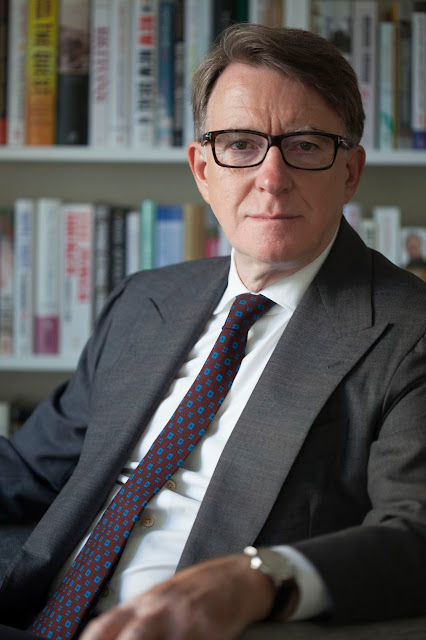 An influential figure from the Tony Blair era says Australia has a major role to play in helping Britain rebuild fractured trade relationships after last year's surprise vote to leave the European Union.

Former Labour cabinet secretary Peter Mandelson says Australia can help Britain keep its place on the world stage as the fallout of Brexit continues to create uncertainty about current and potential trade deals.

Mr Mandelson has been in Sydney and Melbourne to help lay the groundwork for a free trade deal between Australia and the UK which remains on hold until the terms of Britain's exit from the EU are finalised.

"What I'm finding is quite of lot of bemusement about what Britain has done. We turned our backs on Australia in the 1970s order to join Europe. Now we're divorcing Europe all these decades later," Mr Mandelson told the ABC.

"I think many Australian business people just wonder why on earth we should throw all the sticks and all the rules up in the air without any idea where they're going to land."

Mr Mandelson, a former Northern Ireland secretary and EU trade commissioner, says with Prime Minister Theresa May refusing to rule out a "hard Brexit" Australia can help Britain rework it’s image of being protectionist and isolationist.

"One thing Australia can do for Britain is to reintroduce us to the world of trade policy and trade negotiation from which we've been absent for nearly 50 years as we've relied on the size and the heft of the EU," Mr Mandelson said.

"We are part of each other's DNA, we do have a special friendship. But with the extraordinary turn that Britain is now taking in leaving Europe, there is an opportunity to forge a further relationship built on trade realities."

Mr Mandelson was a stalwart of the "remain" campaign and has made his first visit to Australia to offer advice to businesses in his role as chairman of the consultancy firm Global Counsel.

He acknowleges Australia's key trade relationship are now with the United States and China but says Australia was gifted an opportunity in the 1970s when Britain softened traditional links in favour of Europe.

"The biggest favour that Britain ever did for Australia was saying in the 1970s that the protectionist, rather isolationist exclusive relationship it had with Britain needed to end," Mr Mandelson said.

"We forced Australia through the decision of turning our backs and to going into Europe,  to create an open economy and look to its own region.

"Just look at the fortune and prosperity that Australia has been able to achieve. For Britain we've got to make the same judgement that there's no future in retreating into ourselves."

However, Mr Mandelson concedes it might be in Australia's best interests to prioritise an agreement with the EU ahead of one with Britain.

A potential flashpoint from Brexit is the trade relationship between Northern Ireland and the Republic of Ireland which was created after decades of sectarian violence.

Mr Mandelson says after the Good Friday agreement of 1998 saw Northern Ireland to keep its links with the UK but allowed it to participate in  an "all Ireland" economy without hard borders.

"What Brexit does is to just reinsert a border down the middle because when we leave the EU we won't be in a single market. That is going to reintroduce not just trade frictions but political tensions which could very well undermine all that we've achieved in Northern Ireland," Mr Mandelson said.

"I think over time people are going to have to choose between the political settlement they have and the economic future and prospects that they want."

"Britain's political elite was given a good kicking in the reference and in a sense who can be surprised? The British people emerged from the global financial crisis bearing a lot of pain for other people's policy errors."

As the uncertainty about Brexit continues, Mr Mandelson says calling the referendum was "an utterly irresponsible thing to do."
Posted by Peter Ryan at 9:46:00 AM No comments:

Australia's high levels of household debt leave it potentially exposed to a global economic shock or a banking crisis, the International Monetary Fund has warned.

An IMF study into highly leveraged households and financial stability singles out Australia where household debt has risen to 100 percent of GDP, well ahead of other advanced economies where the ratio is lower at 63 percent.

"Higher growth in household debt is associated with a greater probability of banking crises," according to the IMF's latest Global Financial Stability Report.

"New empirical studies - as well as recent experience from the global financial crisis - have shown that increases in private sector credit, including household debt, may raise the likelihood of a financial crisis and could lead to lower growth."

The IMF warns the level of household debt "remains high by historical standards" and "has kept growing in other advanced economies such as Australia and Canada".

Listen to my report from The World Today

While report says that debt can be positive in the long term, it cites research showing that high household indebtedness can cause "a significant debt overhang when a country faces extreme negative shocks".

"The global financial crisis suggests that high household debt can be a source of financial vulnerability and lead to prolonged recessions".

In addition to Australia and Canada, the study says Cyprus, Denmark, Switzerland and the Netherlands are also exposed to significantly higher levels of household debt.

The Reserve Bank of Australia has repeatedly warned about rising levels of household debt and that slowing wages growth means some consumers could struggle to meet mortgage repayments when interest rates start rising.

As expected, the RBA board left the cash rate on hold at 1.5 percent yesterday while noting its ongoing concerns.

"Growth in housing debt has been outpacing the slow growth in household incomes for some time," governor Dr Philip Lowe said in a statement.

While the IMF points to positive effects of higher debt of through higher growth and lower unemployment, it warns the benefits are typically reversed in three to five years.

"There is a trade-off between the short-term benefits of rising household debt to growth and its medium-term costs to macroeconomic and financial stability," the study says.

The IMF also warned that some households increase debt and consumption based on the perceived wealth of their real estate investments.

"Households that base their expectations solely on extrapolations from past events, when house prices have been growing, may increase their borrowing during housing booms because they expect their home equity to continue growing," the research says.

Globally, the median household debt-to-GDP ratio among emerging market economies increased from 15 percent in 2008 to 21 percent in 2016.

Among advanced economies, the ratio increased from 52 percent to 63 percent over the same period.

The IMF says the negative medium-term consequences of higher household debt are more pronounced for advanced economies than for emerging market economies, where household debt is lower.

However, the IMF suggests that fallout from high household indebtedness could be softened if countries improve their financial regulation, reduce dependence on external financing, adopt flexible exchange rates, and lower income inequality.

The IMF's study is based on a study of more than 80 advanced and emerging economies where debt levels are rising a decade after the global financial crisis.

Rates to rise within six months warns RBA "shadow" board

Predictions of a return to higher interest rates sooner rather than later are heating up with a group of eminent economists tipping the first move could be within the next six months.

The "shadow" Reserve Bank board at the Australian National University cites improving local and global economic factors as key reasons for the first cash rate rise since November 2010.

While no means a certainty, the ANU's nine member board sees the probability for a rate rise in six months at 73 percent, up four percentage points from the last vote in September.

Shadow board member Paul Bloxham, who is also HSBC Australia chief economist, says the outlook forhigher rates is underpinned by a strengthening jobs market and businessconditions that could spill over into higher wages.

"What's becoming increasingly clear this month is that the shadow board thinks that the next move for interest rates is likely to be up and more likely than not, it will be within the next six months," Mr Bloxham told the ABC.

"Our own view is that the economy will be in a position by the early part of next year where the RBA will probably consider that it will need to start normalising its cash rate."

The Reserve Bank board holds its October meeting tomorrow with money markets predicting a 100 percent probability that the cash rate will remain steady at the historic low of 1.5 percent.

The meeting will be the first since the most recent national accounts showed solid economic growth in the June quarter and the latest employment figures from the Australian Bureau of Statistics revealed another sharp jump in the number of people in full time jobs.

The cash rate began falling from its most recent high of 4.75 percent in November 2011 as the global economy slowed and the Reserve Bank sought to tame a high Australian dollar which hit 110 US cents in July 2011.

Mr Bloxham says the last piece of the "puzzle" for the Reserve Bank will be evidence of rising inflation and higher wages after a long period of sluggish wage growth.

Also critical, Mr Bloxham says, will be confirmation that the global economy is normalising a decade after the global financial crisis.

"If you look across the global economy at the moment we're seeing the most synchronised upswing in growth that we've seen since 2010," Mr Bloxham said.

However, Mr Bloxham believes the Reserve Bank will be cautious about the pace of rate rises given higher indebted households in Australia's east coast which might be exposed to higher mortgage repayments.

"So when the RBA gets going in lifting its cash rate we think they'll be quite slow. It will be quite a drawn out process of gradual normalisation over a long period," Mr Bloxham said.

The ANU's shadow board is at odds with other economists who see a rate rise as a most distant likelihood.

Westpac chief economist Bill Evans - who correctly predicted the RBA's dramatic rate cuts - believes the first rate rise might not be needed before 2020.