It's a sign of the times as the once in a century mining investment boom rapidly fades.

Cash-strapped resource companies are having to diversify to survive and some are taking unusual and perhaps desperate measures to stay in business.

The West Australian copper, platinum and gold explorer Artemis Resources has literally thrown the switch to Hollywood and will bankroll a B-grade action movie, "Tango Down" which is set to be released next year.

The $8 million investment from Artemis comes as the resources sector is being crunched  by record low commodity prices that are also damaging much bigger mining and energy players like BHP Billiton, Rio Tinto, Woodside and Santos.

Artemis chief executive Ed Mead says the investment is all about providing a glimmer of hope to shareholders who have seen the value of their investments evaporate to 0.0001 cents a share.

"The opportunity present by Tango Down aligns with our commitment to deliver shareholder returns," Mr Mead told investors describing it as "an exciting investment opportunity".

Despite the bankrolling "Tango Downs", Mr Mead signaled it was more of a one-off sideshow rather than Artemis shelving its mining interests all together.

"We will continue to maintain our focus on our prospective gold and base metals projects in the West Pilbara region of Western Australia."

If "Tango Down" is successful. Artemis shareholders could benefit from 20 percent of all profits.

Artemis, which is current valued at just $3.6 million, is betting the film will gather a following given the cult status of writer and lead actor James C. Burns who is famous for the video games "Call of Duty Black Ops" 1 and 2.

But changing with the times is not new for struggling mining companies.

During the "dotcom" boom back at the turn of the century, small operators used their ASX listings to raise money for fledgling technology companies many of which disappeared when the dotcom flash turned to ash.


While the Prime Minister works to sell his proposed tax reforms to state and territory leaders other government business is continuing behind the scenes.

This morning, the Senate inquiry into proposed changes to Australia's media laws has been hearing from the Seven West media empire which has described the reforms as "dangerous" and "piecemeal".

Listen to my report broadcast on "The World Today"

The US Federal Reserve appears unlikely to raise interest rates in the coming months after it's chair Janet Yellen said the world's biggest central bank would "proceed cautiously".

The increasingly dovish language from Dr Yellen comes amid concerns that the recovering US economy remains exposed to the global economic slowdown and potential fallout from a hard economic landing in China.

The Fed recently signaled that rate rises in 2016 had been scaled back from four to two quarter point increases as inflation remains stubbornly low at 1.7 percent and on a slow track to the target of two percent.

"Developments abroad imply that meeting our objectives for employment and inflation will likely require a somewhat lower path for the federal funds rate than was anticipated in December," Dr Yellen told the Economic Club in New York.

"Given the risks to the outlook, I consider it appropriate for the Committee to proceed cautiously in adjusting policy."

The US central bank raised rates from their near zero levels in December for the first time in almost a decade, signalling the emergency from the Wall Street meltdown in 2008 was over.

When the Fed kept rates on hold earlier this month at between 0.25 and 0.5 percent, it pointed to global market volatility, record low oil prices and concerns about China's economy.

But Dr Yellen still has an "expectation of fading headwinds" that will keep the Fed on track for "gradual increases" as appropriate given that the US economy has proven to be"remarkably resilient."

"The overall fallout for the US economy from global market developments since the start of the year will most likely be limited," Dr Yellen said.

Growing expectations that US rates will remain on hold for the next few months saw Wall Street stocks rally with the Dow Jones Industrial Average closing 0.56 percent higher.

The US currency fell and as a result the Australian dollar surged by more than one percent to 76.3 US cents.

Dr Yellen's caution reins in comments from other FOMC (Federal Open Market Committee) members that another rate hike was likely in April or June.

"We're pricing out expectations and reducing our probability of expectations for when that next interest rate hike is going to come if it ever does come," Mr Rosenberg told Bloomberg.

Dr Yellen's dovishess comes as major central banks around the world - including the European Central Bank and the Bank of Japan - pursue a negative interest rates strategy.

A very quiet Easter Monday morning with markets closed in Australia and not much going on elsewhere.

Bloomberg TV in the US was running a pre-recorded Charlie Rose program looking at Latino issues in the race for the  White House.

A special guest who took my eye was Sol Trujillo - the controversial former boss of Telstra here in Australia.

I managed to get one interview with Mr Trujillo for the ABC's "AM" program back in 2008 just as his tenure was looking shaky .. 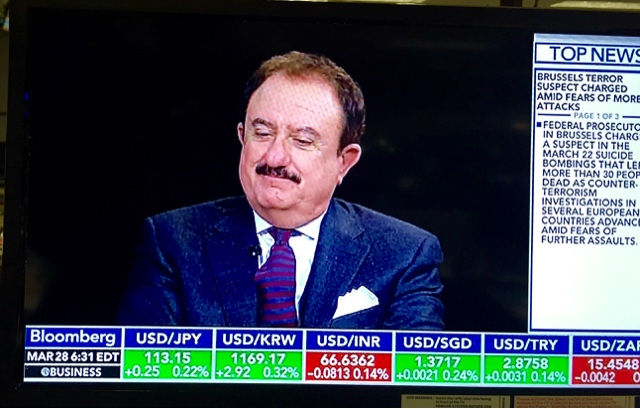