Will the carbon bubble threat spark the next global financial crisis?

I was a participant in this forum at The University of Melbourne's Asia Pacific Social Impact Leadership Centre earlier this week.

With $20 trillion of potentially stranded fossil fuel assets, the forum attracted a big and vibrant audience.

Here's a report from the ABC's Rachel Carbonell where she speaks with Professor Garnaut and Dr Hewson on the threat of the Carbon Bubble.

Jemma Green's opening comments were published in The Fifth Estate.

This interview with Dr Hewson appeared in The Australian.

Jemma Green was also interviewed by The Australian.

Tony Wood had this opinion piece in today's Financial Review (subscription may be required).

Listen to the entire event here.

Here are my opening comments from the Carbon Bubble forum to set the scene for panelists and the audience:

The G20 Summit at the weekend and President Obama’s success in getting the issue of climate change firmly on the agenda is an important backdrop for us this evening.

Rather than seeing Tony Abbott shirtfront Vladimir Putin as sections of the media seemed to expect in a physical sense – it’s now looking as though Mr Abbott might have been the target of a shirtfront from Mr Obama.

And just few days before at the APEC Summit in China there was the unexpected development - that even took a few cynics by surprise - when China and the US pledged to reduce or limit their carbon emissions .

So over the space of a week – perhaps we’re seeing climate change and the short and long term impacts being taken a bit more seriously.

It is of course significant that climate change made it into the G20's closing communique.

So when you think about the potential or frightening reality of a “carbon bubble” you almost see your life flash before your eyes.

How our lives and our high expectations revolve around fossil fuels.

How most of us are conditioned to a world that grinds along based on dirty coal, oil and gas.

How big business, industry, politicians and a range of vested interests are locked in to immense wealth generated through energy sources that are perhaps better suited to their genesis back in the industrial revolution.

There was a key phrase journalists were using at the APEC Summit.

It was “APEC blue” - as Chinese authorities shut down factories and took cars and trucks off the road.

Dirty brown skies that could be mistaken for an overcast day made way for a crisp blue Autumn sky you don’t always see in Beijing – as China and the US prepared to announce their ambitious new targets to slash emissions.

The APEC blue sky shows what can be done if the world is watching – but of course turning aspirational targets and ambitions into tangible and believe outcomes is another.

So here’s the issue we’re facing.

What would happen if to avoid the worst impacts of climate change, governments agreed to accelerate their move away from the use of fossil fuels?

What if renewable technologies started to take over faster than expected and the supply of fossil fuels began to outstrip demand quite dramatically as governments, industry and consumers took climate change seriously and switched away?

A study by HSBC has estimated that if remaining massive reserves of fossil fuels become redundant – they would become unburnable or “stranded assets”.

HSBC has put a number on that – and it’s in the realm of $20 trillion.

Devaluing those assets could end up halve the sharemarket value of fossil fuel companies.

And if you though the Global Financial Crisis sparked by the Lehman Brothers collapse in 2008 was bad – the Carbon Bubble according to some experts would be a whole new world of pain.

So as the scientific evidence of climate change begins to ramp up – just how seriously should we be taking the carbon bubble?

And how should investors respond given that superannuation funds are exposed and in turn – we’re all exposed in terms of our retirement nest eggs.

That should ring a few alarm bells – even for the cynics – especially when in addition to HSBC, you have Standard & Poor’s, Citibank, the Bank of England, Oxford University and the London School of Economics saying we need to take the carbon bubble threat seriously. 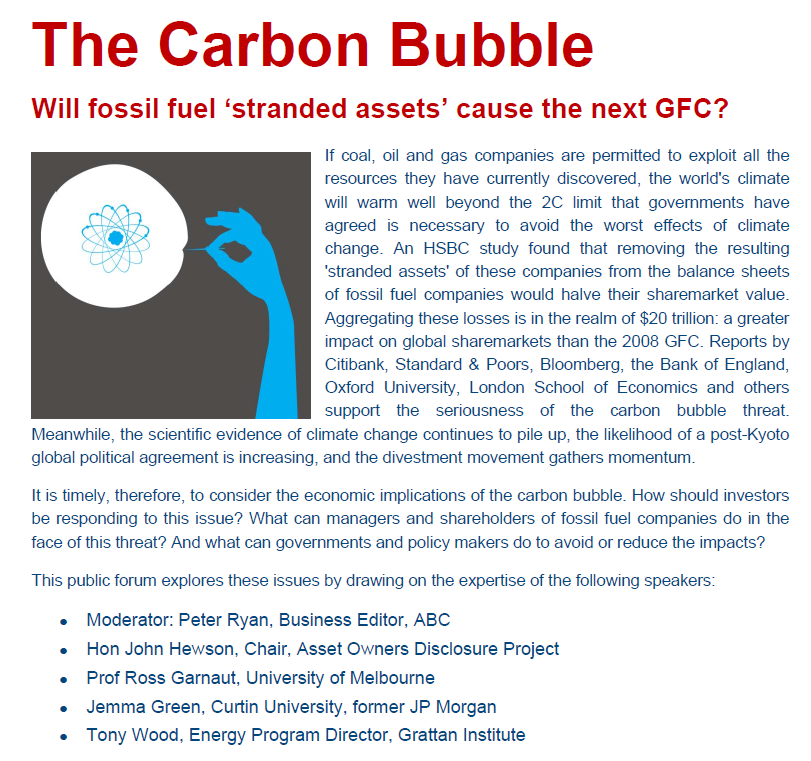