European banks to sell US$4.5 trillion in assets if debt crisis escalates 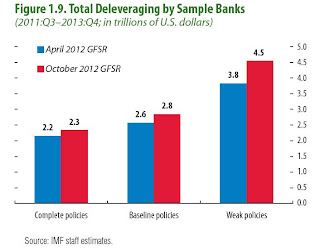 European banks could be forced to sell as much as US$4.5 trillion in assets if the sovereign debt crisis escalates.

The International Monetary Fund says time is running out for European policy makers to implement a single supervisory system to firewall the already fragile banking sector.

According to the IMF's Global Financial Stability Report, the US$4.5 trillion asset contraction is up 18 percent on an earlier estimate in April of US$3.8 trillion in a "weak policies scenario".


A failure to introduce fiscal tightening or a single regulatory system for banks could impact 58 banks across the EU from small institutions to giants like Deutsche Bank.

Even without a worst case scenario - a fracturing of the Eurozone that could see the redomination of currencies - the IMF is predicting a reduction of bank assets of US$2.8 trillion as long as governments follow up on their current committments.

The IMF has estimated that in the year to June, European banks deleveraged by more than US$600 billion.

The IMF's financial counsellor and director Jose Vinals warns the forces of financial and economic fragmentation have widened.

﻿
"The stakes are high. Confidence is still very fragile and risks have increased when compared to the last report in April," Mr Vinals said.

"Actions taken by the European Central Bank have helped remove investors' worst fears. But these policies will need to be further built upon at both the national and euro area level."

The IMF's warning comes just a day saying the risk of a serious global slowdown was "alarmingly high".

While emerging markets have weathered the fallout from Europe so far, the IMF warned that many countries in eastern Europe were vulnerable.

The IMF says emerging Asia nations also need to be on guard to avoid any European spillover.


The latest global outlook from the IMF is the usual weighty document - this time around 100 pages - but you don't need to read beyond the executive summary to get the message that the world remains a dangerous place.

Within the first few paragraphs, the IMF says the global economy has "deteriorated", growth  projections have been "marked down" and that risk factors have become "more elevated".

And there's a more disturbing line, signalling that even the IMF can't be sure even a medium term recovery is in sight:

"A key issue is whether the global economy is just hitting another bout of turbulence in what was always expected to be a slow and bumpy recovery or whether the current slowdown has a more lasting component."

Listen to my analysis broadcast on The World Today.

As a result, the IMF now expects the global economy to grow 3.3 percent this year - down from an earlier prediction of 3.5 percent.

The IMF says next year's forecast is "sluggish" - it puts the risk of a serious global slowdown as "alarmingly high" and warns confidence is "exceptionally fragile."

The IMF's chief economist Olivier Blanchard says emerging Asia, including China, is caught in an spillover - caused in large part by the deepening debt crisis in Europe.

"Because the world now is so interconnected, what happens in one part of the world has an effect on the rest of the world and so all these things are combining to slow down growth, " Mr Blanchard said in Tokyo.

"To avoid a sharp downturn, it's very clear what's needed is that policymakers take the right decisions. So if you look at Europe, the eurozone now has put in place, in principle, an architecture which is very coherent, the problem is implementation and they really have to implement it, that's the key."

The other risk for the world, according to the IMF, is what's known as the "fiscal cliff" in the United States.

Olivier Blanchard has called on Republicans and Democrats to agree on ending the congressional gridlock over planned tax increases and steep spending cuts that could trigger a double dip recession.

"In the US we're getting closer to this thing called a fiscal cliff, which would be a catastrophe if it happened that quickly. So here it's clear that there has to be put in place a fiscal plan, not only for this year but for coming years, which is credible," Mr Blanchard said.

Matt Sherwood, head of investment research at fund manager Perpetual, has been predicting the global slowdown, but even he's surprised at the IMF's direct language.

"Things like fragility, like damaging, and they were unusually blunt, particularly on governments and how they've consistently underestimated the damage done by raising taxes and cutting spending. So it was actually a very unlike IMF kind of statement," Mr Sherwood told The World Today.

Matt Sherwood says the IMF is also warning that the deep austerity seen in Europe could contribute to a new global recession.

"I think really what the governments were initially saying was that if we wear a bit of pain in the short term we will get economic sunshine after 12 months or so," Mr Sherwood said.

"I mean Greece was originally forecast to return to growth in 2013 and those kind of forecasts when you have something like an 8 per cent spending cut in an economy where the government is 40 of the economy, I mean those sort of forecasts are quite farcical, and I think the IMF's come out pretty hard against governments for consistently underestimating what they're actually doing to the economic growth profile.

"As a result it's actually given quite a bit of ammunition to critics of austerity, particularly in Europe."
Australia's growth is only expected to slow marginally, much less than other developed nations, being still supported by the resources sector.

"We suspect that they're going to miss the surplus by around $10 billion this financial year and as a result, if they want to achieve it under the current environment they'll need to find more spending cuts," Mr Sherwood said.

"The problem of course is the economy is already slowing, so if you do more spending cuts and you raise more tax revenue, that slows the economy even further.

"And so we think it might be a good idea for the Government just to abandon this idea of a fiscal surplus for financial year 2013 and just achieve you know a modest deficit."

A closely watched factor will be Australia's jobless rate, which could tick up to 5.3 per cent when the ABS releases the official reading on Thursday.

Reserve Bank governor Glenn Stevens has given a lengthy rebuttal of allegations that the central bank covered up a note-printing scandal facing two of its subsidiary companies.

Former executives from two firms owned by the RBA are facing allegations they paid bribes to win contracts overseas.

Mr Stevens has confirmed one of the agencies, Securency, only called in the Federal Police once it learned a newspaper was planning to run a story on the allegations.

He has told the House of Representatives Economics Committee that, overall, the RBA wanted the allegations looked at because of precedents with other government agencies.

The Age newspaper and the ABC's 7.30 program has reported claims of a cover-up of bribery allegations made against Securency and Note Printing Australia.

The RBA's former deputy governor, Ric Battellino, was aware of the allegations two years before they became public.

He says he did not tell an earlier parliamentary committee what he knew because a whistleblower had asked for secrecy.

"If I have one regret about all this, it's the fact that the bank or myself put his interests ahead of our own," he said.

The appearance of Mr Stevens comes as he is being touted as a contender to take the top job at the Bank of England.

Listen to my report from this morning's edition of AM.

﻿﻿ ﻿﻿
The speculation that Mr Stevens is in the running for the UK central bank's top job is based on a report from the Sunday Times newspaper in London.

It quotes unnamed sources who say Mr Stevens has been approached by Britain's treasury department.

Applications for the job close at 6:30pm (AEDT).

According to the advertisement, the new Bank of England governor will be required to implement "major reforms".

Mr Stevens is widely regarded as the most successful central banker in the developed world, so he has a resume to match the job description.

However, there are questions over whether he would be willing to accept a large pay cut to take on what is arguably a tougher role than his current position.

Mr Stevens earns just under $1 million a year, making him much better paid than his counterparts at the US Federal Reserve, the European Central Bank and the Bank of England, where the governor's role comes in around $480,000 a year.

Another reason it is being regarded as an unlikely move is that Mr Stevens would have to edge out some high-profile local candidates such as the Bank of England's deputy governor Paul Tucker.

Mr Stevens's seven-year term as the head of the RBA expires in September next year.

The Reserve Bank says it has no comment on the reports.